After several months of development, Google announces a stable release of mod_pagespeed, an Apache 2 Web server module that can automatically optimize the Web pages that are served by Apache without any changes to the actual scripts that generate those Web pages.

This article explains in more detail what is mod_pagespeedup and how you can use it to improve the speed of serving your site Web pages.

Conclusion: Shall we use Mod_PageSpeed or not?

If there is a single company that was always obsessed with the speed of access to Web sites, that company must be Google.

Google search engine pages were very simple since the beginning. Unlike competitors, Google search pages did not have advertising or any other sort of needless decoration.

Several years ago, Marissa Mayer, Google vice-president for search products and user experience, explained that changing aspects of Google search results page that made it load a little slower caused significant drop in the number of users that waited for the results.

Over time Google has demonstrated great obsession with optimizing the speed of serving their site pages, as it affects directly their revenue.

More recently Google also invested in encouraging the Web site developers to make their sites faster too. For instance, early this year Google announced that site speed became one of the factors that influence ranking of pages listed in Google search results.

How much site speed really influence search results? We have no idea. But just the fact that they made that announcement, it motivated many Web site developers to focus on optimizing their Web pages.

Actually, to be accurate, a few months before that announcement, Google Analytics launched an asynchronous version of the HTML tags that you need to embed on your pages to track your site visitors. They just announced it on their blog, but most Web site developers were not aware because they do not follow that blog, neither Google seemed to have notified them some other way.

Anyway, the reason for Google wanting to encourage developers to optimize their sites is not evident, as the speed of other sites usually does not affect Google revenue, at least directly.

One of the initiatives on which Google has invested to help Web developers making their sites faster is Page Speed.

Basically Page Speed is an extension for the Firefox browser that can evaluate a loaded Web page to determine aspects that can be changed to improve the page load speed.

YSlow analyzes the current page request in several aspects and give a grade to your page that may go from A (best) to F (worst). Currently it analyzes, the page JavaScript, CSS, images, retrieved content, HTTP server requests and cookies. 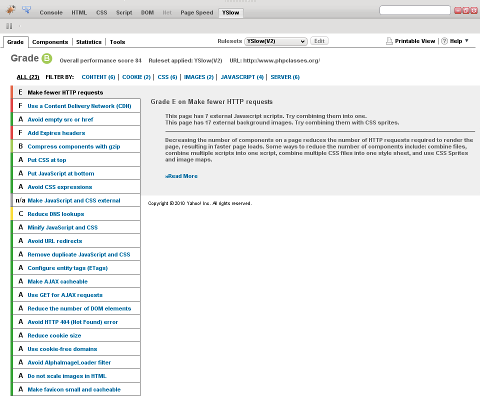 Page Speed also analyzes your page requests a give a grade that may go from 0% (worst) to 100% (best). It also gives advices similar to YSlow, just grouped a slightly different way. 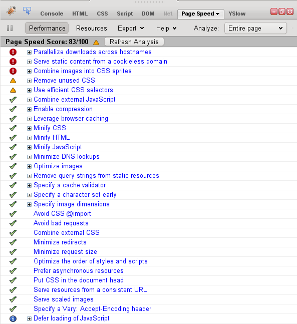 YSlow and Page Speed are great extensions that every Web developer should have at hand. They help guiding the efforts that may be needed to optimize your site pages and make them load faster. However, they usually require good technical understanding and a quite bit of time to change your site code to serve faster Web pages.

This is the point which in my opinion Mod_PageSpeed can help you by saving some time and eventually lower the technical knowledge barrier necessary to put optimization efforts in practice.

Basically Mod_PageSpeed is module for Apache 2.2 Web server. It can automatically analyze each page that is served and perform some of the recommended optimizations on the fly.

This means that instead of having you changing your site pages or the code of your scripts, you just install this Web server extension and it will make the necessary changes to HTML, CSS, JavaScript and HTTP response headers to make serve your pages in a more optimized way.

It would almost the same as if you have actually changed your site code to perform those optimizations, except that you do not need to change anything in your code.

I say it is almost the same because in reality Mod_PageSpeed does not yet perform all the types of optimizations that are suggested by the Page Speed extension. Let me give you an overview of what Mod_PageSpeed can optimize in the current release:

Conclusion: Shall we use Mod_PageSpeed or not?

Mod_PageSpeed is definitely an awesome idea. I would say that it is kind of magic. It is like having an expert on Web page optimization working for you almost for free. I just say it is almost for free because there is some cost associated to its use. The cost that I mean is in terms of CPU overhead that it takes to parse HTTP requests and pages to rearrange them, so the pages are served in a significantly faster way.

Obviously it would be much better if the pages would be generated by your site scripts already in an optimized manner. The fact is that most our pages are not so optimized because we were not aware of all that matters in terms of page speed when we developed the code of our sites.

So, for existing sites, using Mod_PageSpeed may be the fastest way to accelerate your site pages, with the advantage is that it practically takes no development effort.

Now, if you ask me if I am going to use it in my sites, I have to confess I have a few concerns. One of them is that nothing is perfect. I mean all software has bugs. It is already hard to deal with the bugs of my software. It will be harder to deal also with bugs of new piece of software that I add to my server, which I did not develop and in reality is not essential.

Since this is basically the first stable release of Mod_PageSpeed, expect it to have plenty of bugs that need to be fixed but that will only happen after somebody reports them. So it is probably better to wait a little while before embracing this as a definite solution in a production environment.

Another aspect is that Mod_PageSpeed does not really perform all sorts of optimization that the Page Speed extension recommends. Some optimizations can only be done with knowledge of your site context. Other optimizations can be done but still require some changes in the site code.

One of such optimizations is the use of sprites, I mean grouping several common site images into a single sprite image. It would be great if Mod_PageSpeed could gather those images for me in a sprite, but I think I know better which images are worth grouping in sprites.

On the other hand, nowadays I use a multi-threaded Web server, in this case lightttpd, to serve static content. Mod_PageSpeed is meant for Apache 2. So it is probably better that I generate the sprites images manually, instead of depending on Mod_PageSpeed to do it for me.

Another optimization that I need to do is related to the site cookies. Over time I have used the base site domain for the cookies. The problem is that it includes all sub-domains, including the sub-domain used by multi-threaded Web server that is to serve static content, like images, CSS and JavaScript.

What about you? If you are a hosting company, you may be tempted to use Mod_PageSpeed right away on all sites of your customers. What if that breaks their sites for some unanticipated reason? It will probably lead to a support nightmare. On the other hand it may all work OK and you can benefit from the speed increase of your site customers.

What do you think? Do you intend to take the chance and use Mod_PageSpeed in your sites or not? Feel free to post your comments about this issue.

4. Server configuration and performance tips (2010-11-18 02:55)
I’ve found today two interesting articles with tips how to improve the performance of your servers...

2. PHPClasses.org: Accelerate Web Pages Automatically using Google Mod_PageSpeed (2010-11-17 10:18)
On the PHPClasses.org blog there’s a new post looking at Google’s latest optimization offering, mod_pagespeed, and how it can help the performance of your applications (and if it’s even worth using)...